Litecoin prediction as price corrects above a breakout zone

Litecoin (LTC/USD) has been gaining strength in the last one week. As CoinJournal reported, the recovery could be contributed by the next Litecoin halving event. The gains saw it initiate a breakout that has been pushing prices higher. However, the price of LTC is correcting, with an intraday loss of 6%. Will the downturn continue?

Veteran crypto trader Peter Brandt believes LTC has initiated a classic charting pattern for an upside. According to the analyst, the appearance of a bullish double pattern followed by an uptrend is a major trend change signal. Brandt says LTC completed the same pattern in November before embarking on a rally that returned 65%.

Brandt further explains why the double bottom for LTC is a classic one. He says, often, traders tend to mislabel double bottoms. In his view, double bottoms need months between lows. He says the depth of the pattern should be more than 20% of the price of the market. 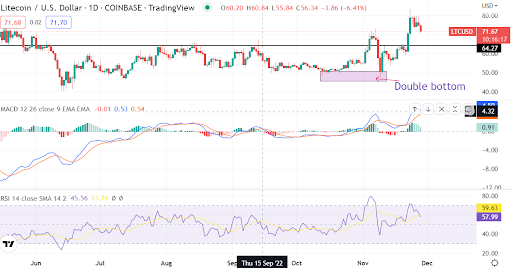 Pi Coin price prediction: Is Pi Network worth anything?

A technical outlook shows that LTC buyers are still in control despite the price slowing from the $80 level. The daily chart shows a short-term bullish trendline has developed since the double bottom at $50.

The MACD indicator is bullish. The RSI has slowed slightly since the cryptocurrency hit overbought levels as the price reached $80. The bulls are still in control as the RSI remains above the midpoint.

What next for LTC?

Litecoin price is in a correction phase rather than a bearish movement. $64 will remain the reference support should LTC continue to correct downsides. However, the area around $70 should also form a crucial bullish reversal zone.

LTC price target remains at $95 in the medium term. This is the established resistance zone. Investors can hold or buy LTC to the level as long as the bullish momentum remains.

Where to buy LTC

eToro offers a wide range of cryptos, such as Bitcoin, XRP and others, alongside crypto/fiat and crypto/crypto pairs. eToro users can connect with, learn from, and copy or get copied by other users.

The post Litecoin prediction as price corrects above a breakout zone appeared first on CoinJournal.

BlockFi files for bankruptcy, cites FTX collapse for its troubles

Pi Coin price prediction: Is Pi Network worth anything?

GameStop to drop crypto efforts as Q3 losses near $95M

MATIC set to be bullish after Starbucks Odyssey Beta…

TradFi and DeFi come together at Davos 2023: Finance…

Elon Musk alleges SBF donated over $1B to Democrats: ‘Where…

FTX And Bitcoin: The Good, The Bad And The Ugly